Juicer Mixer Grinder – Everything You Need to Know

What Is A Juicer Mixer Grinder?

A juicer mixer grinder is exactly what the name says – an appliance that can function as a juicer, a mixer, and a grinder. It’s not very different from a regular mixer grinder, apart from the fact that it comes with a special jar for juicing.

How Does A Juicer Mixer Grinder Work?

The working principle of a juicer mixer grinder is far simpler than other types of juicers in the market. The bottom part of the appliance houses all the electrical components, including the motor. Now, a straight metal rod protrudes from the motor with a coupler on top. This attachment locks into a similar one under the jar.

A juicer mixer grinder usually has two or more jars that you can interchange and use as per your requirements. All of them have a set of blades installed at the bottom, connected to the coupler mentioned earlier.

However, the juicer jar has an additional component – a tall cylindrical ring with a sieve. As the motor starts running, the blades rotate at a very high speed, cutting and crushing the ingredients into pulp. Choose the right wattage according to the type and quantity of the ingredients.

The powerful circular motion generates a centrifugal force, whipping around the contents and extracting the juice. A sieve installed inside the jar allows the juice to pass into the outlet spout while holding back the pulp. The working principle remains more or less the same for juicing, mixing, and grinding.

Among all the different juicers available in the market, the juicer mixer grinder’s biggest perk lies in its versatility. Considering its mixing, grinding, and blending capabilities, this is hands-down the most versatile juicer you can get.

Especially if you don’t have a mixer grinder already, a juicer mixer grinder can be a great addition to your kitchen. Besides helping you make healthy juices, shakes, and smoothies, it would also make cooking much more convenient and easier.

The affordable pricing of the best juicer mixer grinders is one of the reasons behind their widespread popularity in the Indian market. These relatively simple appliances are very budget-friendly, making them a good choice for buyers on a tight budget. Check the juicer mixer grinder pricelist to choose a suitable product according to your budget.

Value for money goes hand in hand with versatility and cheap pricing. After all, who wouldn’t like a juicer that can also serve the purpose of a mixer grinder?

The working principle shares similarities with that of a centrifugal juicer, which means the juice extraction process is quite fast. The rapidly rotating blades of juicer mixer grinders take only a few minutes to crush the produce and extract the juice. This is a great advantage for those who are usually in a rush and don’t want to spend too much time juicing.

The versatility of juicer mixer grinders comes at a cost – efficiency. A juicer mixer grinder isn’t designed specifically for juicing alone but for a variety of purposes. As a result, the juicing technique isn’t as efficient as cold press juicers, and a good portion of the juice stays behind in the pulp. This means you’ll be getting less juice compared to when using a different type of juicer, from the same amount of ingredients.

This is another problem that juicer mixer grinders share with centrifugal juicers. The motor is noisy, and so is all the crushing and grinding carried out by the blades. Using this appliance can generate a fair deal of noise unless you specifically buy a low-noise juicer mixer grinder.

3. Not Good At Juicing Hard Fruits

While these juicers are great at juicing watermelons, cucumbers, and other fruits/veggies with high water content, we can’t say the same about juicing hard fruits and veggies. The juicer jar will have a hard time extracting juice properly from beetroot, kale, carrots, apples, etc. The same problem persists for leafy vegetables like spinach too.

4. It Breaks Down Nutrients

Just like a centrifugal juicer, a juicer mixer grinder breaks down various essential nutrients and enzymes too. This significantly lowers the nutritional content of the juice produced, as compared to cold press juicers. If you are planning to buy the juicer mainly for the health benefits of drinking fruit and vegetable juicers, this is something you should certainly consider.

Parts Of A Juicer Mixer Grinder

Blades are the most crucial components of a juicer mixer grinder. While most brands provide three blades for juicing/ blending, grinding, and mixing chutneys, advanced models have separate blades for dry and wet grinding.

Among all materials, stainless steel is most preferable for blades as it does not corrode or react with acidic food ingredients. So, you can use the mixer grinder blades for different purposes according to your need.

Juicer mixer grinders come with multiple jars for different purposes like dry grinding, wet grinding, juicing, and blending. The juicer jar has a tall cylindrical structure in the middle with a juicing sieve to separate the juice from the pulp.

Connected to this cylindrical structure is an outlet spout that pours the juice into a glass or a different container placed underneath. The blender jar usually has tall prongs connected to the blades to stir and blend liquids perfectly.

As you can probably figure out from its name, this is a container to collect the pulp left behind after extracting the juice. However, not every juicer mixer grinder has a pulp container – some just store the pulp on the outer part of the juicer jar. When making several batches of juice, you will have to remove the pulp in between to keep the juicer working properly.

Although not every juicer mixer grinder has this feature, some come with a designated jar for collecting the juice. This means rather than having to collect the juice directly in a glass/cup, and you can store it in the container and then pour it out as needed.

Remember we mentioned a locking component at the end of the motor’s shaft that locks into a counterpart on the bottom of the juicing jar? This is the motor coupler – a crucial component that passes on the motor’s energy to the moving parts of a machine.

The juicing jar may have a feeding tube on the top through which you can feed fruits and veggies into it. However, you’ll have to cut them down into smaller pieces before you drop them in.

How To Use A Juicer Mixer Grinder?

Are Juicer Mixer Grinders Better Than Other Types Of Juicers?

Juicer mixer grinders aren’t your best choice in terms of juicing alone. There are other types of juicers that deliver better juice quality and higher yield. However, it stands out due to its undeniable versatility and value for money. If you don’t have a mixer grinder in your kitchen already, a juicer mixer grinder will indeed be a great pick. Else, you should consider getting one of the other juicer types available in the market. 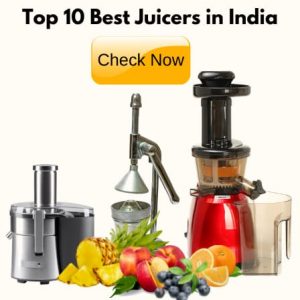 Being a reader-supported blog, ProJuicer.in earns affiliate commission from purchases made using links on our website. Read Full Disclaimer

ProJuicer.in is an online portal containing valuable guides, expert tips, and practical reviews of juicers, blenders, mixers, and grinders. ProJuicer is also one of the trusted names in India when comparing different juicing machines, mixer grinders, and blenders for making delicious juices, smoothies, and mocktails.